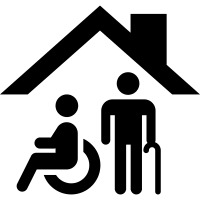 As the new Medical Director of Long Term Care (LTC) in January of 2020, Dr. Margaret Manville developed an interest in the younger LTC residents with unique needs. When she looked into the numbers, she saw that the population of residents who were younger than 75 and didn’t have a dementia diagnosis had actually increased by 20% since 2014. This posed a challenge:  Most LTC facilities are designed and staffed for residents who are typically frail elders with dementia, people who are well-served by the geriatric psychiatrists who attend LTC homes.  It’s that younger LTC population (that can suffer from schizophrenia, bipolar illness, depression, anxiety, substance use and behavioural challenges) that Family Physicians struggle to access adult psychiatry services for.  Additionally, hospitals have difficulty discharging younger patients who are waiting for a LTC bed, since LTC facilities are reluctant to accept patients with chronic mental health diagnoses without continuity of their psychiatric care.

Recognizing the need to bring all stakeholders together, Dr. Manville and Dr. Chris Blashko used a SIFEI grant to convene a series of meetings with staff and clinicians at The Summit LTC facility, including Dacia Reid, Lisa Diamond and Peter Donohoe, Mental Health and Substance Use leaders Dr. Nelson Collins and Dr. Wei-Song, and Island Health LTC colleagues Carmela Vezza, and Philip Friesen.  The Summit’s Specialized Population Unit (SPU) was planned with the needs of younger residents in mind, facilitated by leadership from Dr. Chris Blashko.

The Specialized Population Unit opened in Spring 2022 and benefitted tremendously from Dr. Blashko’s consultative expertise in looking after its first residents. This pilot project demonstrated what it took to look after the unique needs of this population:  It demanded a highly skilled, multidisciplinary approach, rather than one-off psychiatry visits. Staff required specialized training in mental health supports within LTC, as the needs of this group differ from the traditional LTC population of frail, elderly seniors.

The next phase of this project is to develop supports for younger LTC residents with mental health needs in other Island Health owned and operated sites, as well as affiliated LTC homes.

Dr. Manville sees the value of ongoing effort to support those LTC residents below 75 with mental health issues. “This is a growing population in LTC and we need to plan for the future. We’re going to need more collaboration between adult psychiatry and LTC.”

“The magic of this funding is that it allows us to bring people together. This work only happens if there is effort put behind it. It provides a guiding light, like, ‘we’ve got the funding, let’s go,’”says Dr. Manville. “People get really excited and feel like they’re contributing to improvements in care, not only for one person, but also improvements in the system.”